It’s Throwback Thursday and in honor of the Netflix release of Jessica Jones, we will take a look back on Jessica’s debut in the Marvel Universe- Alias #1

Muted colors, a gritty city landscape, and an opening panel that begins with an expletive. Alias is not poetic in painting Jessica’s world. As if embodying Jessica’s personality itself, the series is blunt and to the point, unapologetic about the darker realities of superheroes who have left their costumes behind. Jeph Loeb described it best in the opening of Alias #1- “comic book noir.”

In lieu of the whiskey bottle, Alias pictures Jones leaning against her desk, head cocked, puffing on a cigarette while listening to her prospective clients. Her former life is hinted upon when we see a framed photograph of Jones grinning alongside her past costumed teammates, among them Iron Man, Thor, and Ms. Marvel.

Only when accepting what seems to be a run of the mill missing person’s case, does she accidentally track down Captain America and realizes this case is not just a coincidence.

Alias ran for 28 issues, ceasing publication in January 2004, and served as the inspiration for season one of Netflix’s Jessica Jones. Jessica’s adventures later continued in the new series The Pulse in April 2004.

Interested in reading Alias? You can find issue #1 here 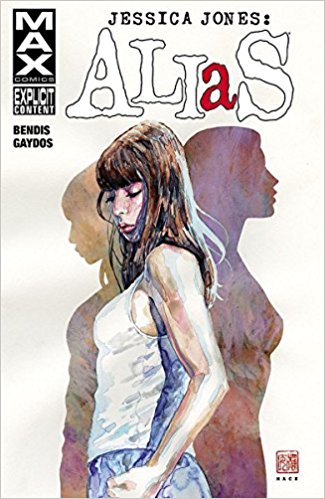